Back in January, while I was furiously planning my dissertation travel for the upcoming semester, I needed to compile a list of archives. Immediately. I wanted to plan a series of trips to archives holding television production materials, but I didn’t know where to start my search. My only option was to cold-call archives. I hoped that some friendly archivist would take pity on a poor graduate student and let me into their collection.

My timing could not have been more fortuitous; one of the first people I emailed was Casey Davis, the amazing project manager at the American Archive of Public Broadcasting. Casey exemplifies the AAPB; she’s a friendly librarian dedicated to opening access to public broadcasting materials and to connecting researchers with archivists. At the time, the American Archive of Public Broadcasting had a basic webpage (they have since launched a beautiful website). Casey generously helped me get into touch with the archivists at WGBH. She also suggested other contacts for me within the AAPB network.

A few months later, I was on a train headed to Boston to visit WGBH. The glistening glass building that houses WGBH instantly wowed me. Keith Luf, the head of the archives, met me in the foyer of the building. He graciously gave me a tour of the building, allowing me to glimpse the studios and the offices of NOVA, Masterpiece, Antiques Roadshow, and American Experience. For a longtime fan of PBS like myself, I was thrilled at the chance to walk along the same halls as the people who create these amazing programs. 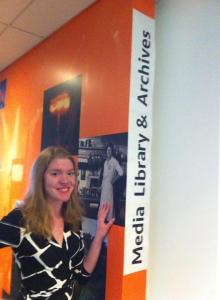 One of the highlights of my travel was simply poring over files upon files of material. Or taking tea breaks from my researching and gazing out at Boston’s skyline. But just as valuable were my chats with Keith about the history of WGBH, Leah Weisse about the management of the collection, and Casey about the future of the AAPB. I am so grateful for the amount of time that they took talking with me!

Best hidden gem at WGBH? I spent a lot of time hanging out in the ‘viewing room’ and watching old episodes of NOVA. This room was a goldmine for researchers like myself – it had a working U-matic cassette player! And the best part? Leaning against the back wall was a vintage ‘Edward Gorey’, a life size sketch of a bat hanging from a bird perch by the artist Edward Gorey for the television program “Mystery!” It was just one of the many interesting artifacts in the WGBH collection.

In May, I was on another train, this time bound to College Park, Maryland. This time, I visited another archive that participates in the AAPB, the National Public Broadcasting Archives at the University of Maryland. Chuck Howell was my main contact (he specializes in the history of mass media). The National Public Broadcasting Archives is home to many interesting collections related to the history of television, including the papers for National Public Radio and the Corporation for Public Broadcasting. I was there to peruse correspondence, memos, and publicity held within the Children’s Television Workshop’s papers. What does the Children’s Television Workshop have to do with science? In the 1970s, the creators of Sesame Street and the Electric Company wanted to create a daily science series for children. The resulting program was 3-2-1 Contact!

I spent less than a week at the University of Maryland, but I was just as impressed with the collection as I had been with WGBH. Michael Henry, another archivist specializing inbroadcast journalism, greatly helped to familiarize me with the collection. Like WGBH, I discovered that I learned a lot simply by talking to the archivists. On my last day, Michael showed me the Broadcasting Reading Room on the library’s second floor. The Reading Room was an impressive space, lined with a several dramatic murals from the 1940s, each extolling the virtues of an age of radio and television. Radios, record players, and televisions – each restored to impeccable condition – lined the walls. Wandering up to each item and peering at it, I felt like a kid in a candy shop! One of my favorite artifacts in this collection was a German entertainment system from the 1950s that included a recordable tape deck and turntable. Additionally, it was housed in a beautiful wooden cabinet – perfect for what must have been a top-of-the line luxury item.

I’ve been really lucky to be able to research in such wonderful collections. I’m grateful that nonprofit and government institutions like WGBH and the University of Maryland are equally committed to providing open access to historians and researchers; I applaud the AAPB on their mission to heighten the public’s awareness of historic public media. Hopefully, through my own research, I can also contribute to a greater cultural appreciation of the history of public broadcasting.